Surface parameters give clues to life in the middle stone age

Porc-Epic cave is located near Dire Dawa in eastern Ethiopia. It is home to the largest collection of ochre fragments ever discovered at a prehistoric site in East Africa, dating back to the Middle Stone Age (i.e. 35,000 to 40,000 years ago).

A team of archaeologists from the University of Bordeaux working at the site have recently been using conventional roughness parameters to analyze measurements taken on some of the ochre fragments. Alain Queffelec of the French National Centre for Scientific Research (CNRS/PACEA) tells Surface Newsletter how, more widely speaking, this is contributing to a greater understanding of the behavioral system of stone-age man.

“The purpose of our study is to bring new light to the debate on the origin and development of cultural complexity and to improve our understanding of the symbolic behavior of hunter-gatherers during the Middle Stone Age in East Africa” says Alain Queffelec.
“In order to do this, we analyzed a collection of ochre pieces found at Porc-Epic cave. A large number of these show traces of use, in particular flaking scars and striations produced by grinding.”

“Non-invasive tribological analysis using a Sensofar S neox optical profilometer was conducted on 19 fine-grained archaeological ochre fragments with one or several abraded facets (see examples in figure page 5). The results of this analysis were compared to an experimental reference system established using pieces of ochre abraded on grindstones similar to those found at the site.

3D views of some of the experimental (A to C) and archaeological surfaces (D to F) used in the study,
generated using SensoMap software based on Mountains® technology

The resulting surfaces were processed using SensoMap software based on Mountains® technology in order to eliminate shape then remove outliers, fill in non-measured points and separate waviness from roughness by applying a Gaussian filter with a threshold of 0.25mm.
The figure on page 4 shows some examples of these surfaces, including experimental surfaces. After testing multiple standard parameters (ISO 25178), Sq and Sdr were judged the most effective for differentiating experimental surfaces. As a result, these two parameters were used for the comparison of archaeological surfaces. 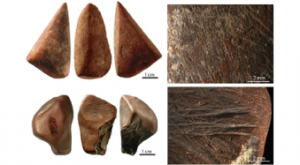 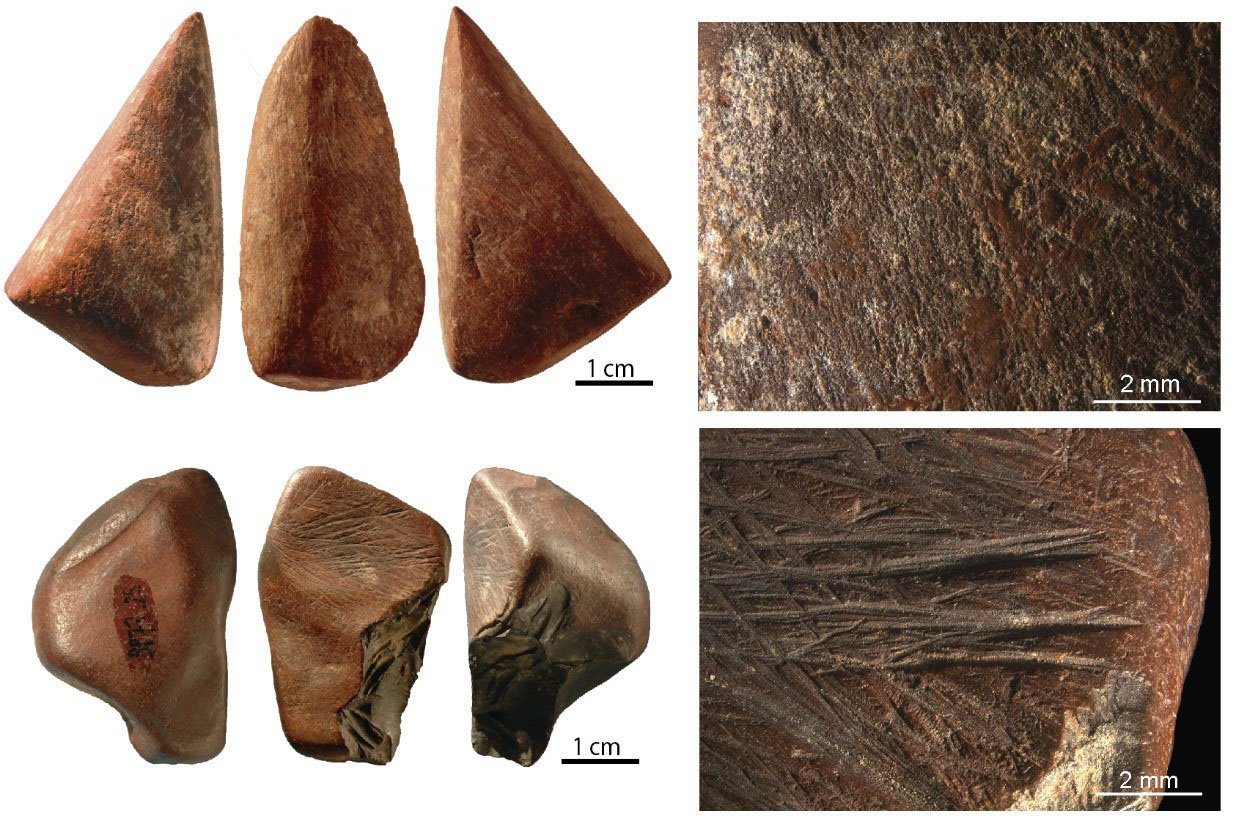 Two examples of ochre fragments with facets and details of these facets showing striations.

Confirming the symbolic use of ochre

Our results indicate that some archaeological samples show similar wear on all facets whereas, in others, wear on different facets differs. This makes it possible, for the first time, to confirm that the ochre fragments were used on different grindstones and probably reused at different times to produce small quantities of ochre powders. These powders, of different colors and granulometry, may have been used for purposes of a symbolic nature (such as body painting, producing patterns on media or signaling).

The results of this study greatly improve our understanding of the use of ochre by hunter-gatherers in the Middle Stone Age.

Measurement analysis using conventional roughness parameters allowed us to create, for the first time, a quantified referential model. Application of other analysis methods such as wavelets or fractal analysis could enable further research in this field in the future.

The study of ochre pieces from other sites analyzed using a similar methodology could help identify changes through time in the way ochre was modified and provide more information on its functions during the Middle Stone Age. Ultimately, this could help establish when early humans first used pigments symbolically. Nature, the International Journal of Science, recently revealed the discovery by an international team including scientists from the PACEA (CNRS/University of Bordeaux/French Ministry of Culture) research unit of the oldest drawing known to man. Among the tools used to bring this unique treasure to light, SensoMap software, based on Mountains® technology helped researchers to precisely […]