Graphene oxide (GO) is a two-dimensional nanomaterial composed of a graphene monolayer highly functionalized with oxygen-containing chemical groups. Recently, GO nanostructures have attracted great interest due to their exceptional physicochemical properties for many applications. Crucially, GO sheets can be converted into a graphene-like material, named reduced graphene oxide (rGO), by relatively easy, scalable and cost-effective synthesis methods. GO has therefore arisen as a key element in obtaining graphene-like materials at an industrial scale.

Dr Angel Perez del Pino of the Instituto de Ciencia de Materiales de Barcelona (ICMAB)* in Spain, specializes in the transformation of materials by laser processing. With fellow researchers, he recently published findings on the conductivity of such processed GO materials. 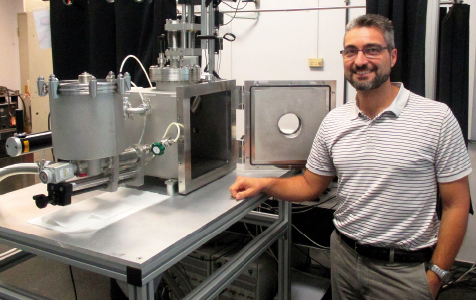 Graphene oxide exhibits very interesting functional properties: it is dispersable in water, biocompatible and its electrical conductivity and optical band gap can be tailored just by modifying its oxidation degree. GO is an electrical insulator whereas rGO is more conductive and can act as a p-type semiconductor. Both GO and rGO have tremendous potential to be used in a variety of electrochemical applications, such as photocatalysts.

Laser processing has arisen as a very promising tool for scalable fabrication of rGO-based devices. In a recent study, we applied nanosecond pulsed ultraviolet laser radiation to GO membranes in gaseous and liquid ammonia-rich conditions. By analyzing structure and composition of the resulting materials, we were able to demonstrate significant differences in the morphology and chemical composition of samples fabricated under analogous laser conditions in these two different environments.

Samples irradiated in gaseous conditions undergo a significant deoxygenation process, a slight incorporation of nitrogen species into the reduced GO structure and a large morphological modification. The resulting material is highly conductive whereas the analogous treatment in liquid provokes only a slight decrease in resistance.

SPM-based electric characterization was carried out to further investigate conductivity and the resulting series of spectra processed in Mountains® software showed the distinct electrical properties of each sample (figure 1 below).

When measured with scanning probe microscopy, laser-induced structural defects appear in the gaseous environment sample as tiny filament-like features. Using the multilayer feature in Mountains® (figure 2), we were able to create three-dimensional topography-resistance maps which confirm that these filamentary structures mostly show higher resistance at their topmost sites (crests).”

Mountains®, an all-in-one solution for multiple types of analysis

Math functions can be applied to data using Mountains®. In this case, the math function abs(A)-13 is applied to a series of spectra in order to convert the raw signal into electrical resistivity.
This makes it possible to observe asymmetric resistance in the non-irradiated GO membrane (in blue). The irradiated samples (gaseous conditions in red, liquid conditions in gold) reveal symmetric behavior and disclose the ohmic nature of the material. 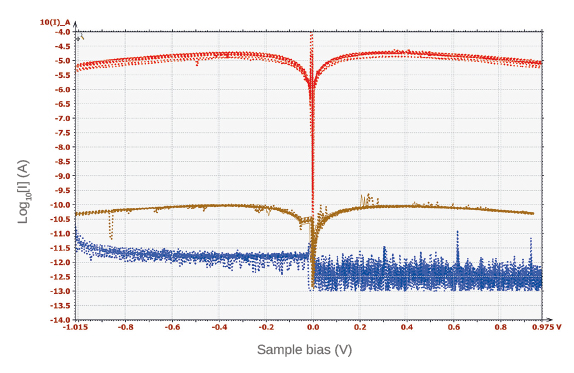 * The ICMAB is a research institute of the Consejo Superior de Investigaciones Científicas (CSIC), the largest research organization in Spain focusing on basic and applied research. Find out more: www.icmab.es