Pyramid-shaped solar cells are particularly effective for converting energy from the sun into usable energy without the problem of overheating.

In a study on solar cell performance enhancement, industrial researchers used Mountains® to visualize surface topography in 3D and overlay a color image of solar cells on topography.

The 3D View study was applied and a 3D representation of the surface was obtained. The rainbow color scale applied here is the one traditionally used to express height on a physical map: the lowest points are blue (the sea), the plains are green, the mountains red and the highest points are white (snow-capped peaks). 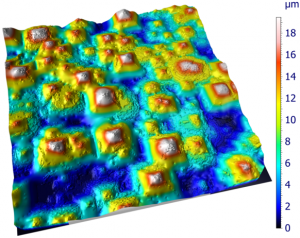 The color image was overlaid onto the 3D topography. Transparency level of the color image overlay was fine-tuned to the level of 30% in order to obtain optimal 3D surface rendering and allow better visualization of the studied surface. 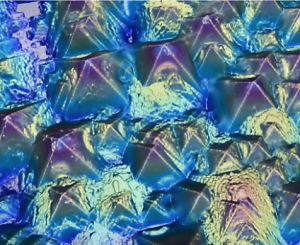