Dental erosion (erosive tooth wear) is a widely recognized dental health problem. Most commonly caused by acidic foods and drinks, it involves the etching away of enamel from the tooth surface, giving the tooth a dull yellow appearance and resulting in tooth sensitivity and pain. Petros Mylonas is part of a team of researchers at King’s College London working on ways to improve understanding of dental erosion in order to find new, innovative solutions for clinicians dealing with the problem. 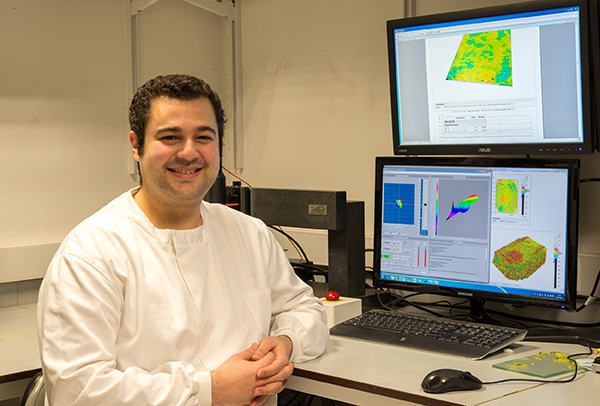 “The research we’ve been conducting utilizes two types of enamel samples: flat and unpolished.” explains Petros. “Each sample was measured using a 3D profilometer then subjected to acid erosion. New measurements were performed after 5, 10 and 15 minutes.”
“For the flat samples it was very simple to evaluate erosion by examining differences in step height over time as we have a flat datum either side of the eroded lesion. However, the results could not be considered clinically relevant because humans do not have artificially flat teeth! The use of unpolished natural enamel is therefore much more relevant.

That said, the problem we found was that the surface of unpolished enamel varies randomly and the topography of the erosion lesion itself also varies randomly. It seemed very difficult to define a zero height-value (or baseline) and so at first we thought we would be unable to use step height to determine erosion. Another problem was, for the measurement taken after 5 minutes, the evolution of erosion height was very small (sub-micrometer scale). Despite these difficulties, with the help of the Mountains® support team, we were able to find a method based on surface metrology and ISO standards, to achieve accurate step height comparison.

The biggest challenge was to position the different surfaces exactly at the same level before subtracting their heights from that of the original sample.
When we first observed our data using the “4D view” feature, it became clear that there was a slight shift between the measured surfaces. Using Mountains® we were able to align the surfaces at the same XY location.
Gaussian filtration (cut-off 0.8mm) according to ISO 16610 was applied in order to obtain surface roughness and better see the differences and position of the measured samples.
Then the Shift surface operator was used to correctly align surfaces on the XY plane. At this stage, there was no visible erosion when watching the 4D view series.

Above. The measured surfaces were correctly aligned with the Shift surface operator and ready for further analysis.

2- From 4D view to step height highlighting change over time

From the shifted series, we extracted the surfaces in order to perform height subtraction from the original and thus detect erosion zones. We applied leveling – at the same time excluding the eroded circular zone – and we were able to define the plane obtained as our Z-axis origin (or baseline).

The final step was to measure the difference of height between steps. Using the Step height study in Mountains® we were able to accurately visualize and quantify sub-micrometer height differences between measurements.

Above. Extracted height of the erosion zone at 5, 10 and 15 minutes (with control chart).