1- Capture two images of your sample

For stereoscopic 3D reconstruction to work correctly and accurately, the two SEM images used must be taken from two different angles of view. A stereo pair is typically obtained by tilting or rotating the sample by a few degrees along the X or Y axis. The diagram below represents the SEM tilt stage (left) and a sample to be studied (right). Topography has been simplified to two “pillars”, one low and one high (the sample is pictured from above):

When the sample is rotated around the Y axis, we can see that the top of the pillars have moved right along the X axis: 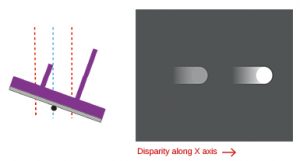 Now if we reverse rotation, the pillars move left along the X axis: 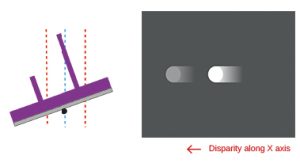 In the two resulting images, the difference between the positions of the pillars is called disparity. Note that the higher the pillar, the great the disparity. And if disparity and angle of rotation are known values, it is possible to determine the height of the pillars.

A few other things to bear in mind…

If you already have a rough idea of the height value of your sample, you should choose a magnification value which will result in an image 20 times as wide as the expected height value and use a tilt value of 5 to 10°.

After a bit of practice, you will be able to reconstruct samples featuring smaller height values.

2- Ensure disparity is along one axis only

NB. Reconstruction is still possible with a disparity of just a few pixels along two axes (X and Y), but calculation time will be significantly longer and the result will be less accurate.

In order to avoid image shift, if you have a eucentric table, the center of the rotation axis should coincide with the center of gravity of the sample. In all other cases, when rotating the table between two image takes, you should ensure that a significant feature of your sample is positioned at the same point on each. Once again, Mountains® can deal with image shift of a few pixels, but this significantly increases calculation time.

4- Use the same magnification and working distance

As a general rule, magnification and working distance (distance from the sample to the projected image) should be the same for both images.

Only sufficiently textured areas in images may be successfully matched. It is important to avoid uniform zones.

Similarly overexposed zones do not contain enough texture and cannot be matched correctly.

6- Only use clear and focused images

7- Use images with the same contrast and brightness

Make sure that both images have the same contrast and intensity. This will make point matching a lot easier. The Enhance Image Operator in Mountains® can be used to correct image contrast and brightness before reconstruction. 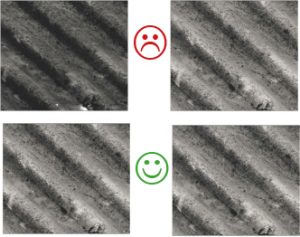 Check your images: Once you have your stereo pair, you can do a quick visual check by opening the images in your File Explorer and switching quickly from one to the other.

Find more about our stereoscopic reconstruction on our Video Tutorial.